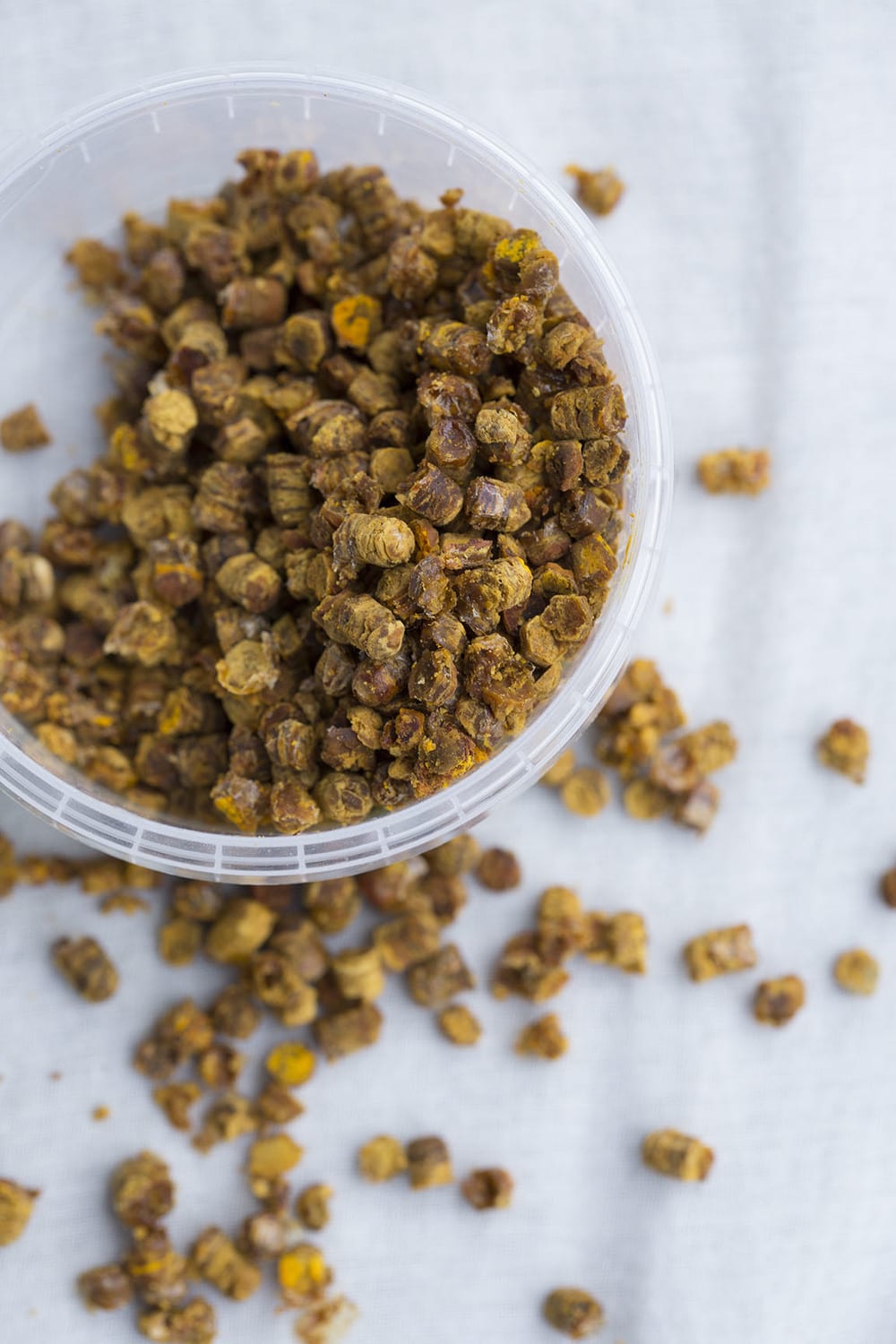 
Honeybees (Apis mellifera) have mastered feats of chemical engineering as various as they are alchemical. Their most well-known substances are of course honey, their concentrated, stable, hive-warming energy source, and wax, their pliable, moisture-proof structural material. Yet there are others which nowadays are known primarily only to beekeepers and practitioners of traditional medicines. Propolis (or ‘bee glue’) is used as a structural sealant and potent antimicrobial agent within the hive and carries a beautiful resinous aroma. Royal jelly is what all brood—the immature larvae and pupae—are first fed before being weaned onto honey (unlike the future queen, who becomes differentiated by being fed only royal jelly) and it has remarkable moisturising, emulsifying and stabilising properties. Even the brood are used as food in many cultures around the world and have a delicate savouriness with hints of raw nuts or avocado.

Each substance is fascinating in its own right, though pollen is particularly notable for the transformation it undergoes between its collection and storage. While bees use honey as their primary energy source, pollen is whence they derive the rest of their nourishment: proteins, vitamins, and other vital nutrients. At first glance, bee pollen seems like quite a straightforward product—in the course of pollinating thousands of flowers every day, worker bees are repeatedly showered with grains of pollen, some of which accumulate into granules on the hairs of their hind legs. This is the pollen most commonly available on the market, largely because it is relatively easy to gather with a small device attached to the hive door that knocks the pollen off the returning bees’ legs as they enter.

But the bees do not consume their pollen fresh. Instead, they take it into the hive and pack the granules into empty comb cells, mixing them with nectar and digestive fluids and sealing the cell with a drop of honey. Once processed in this way, the pollen remains stable indefinitely. Beekeepers call this form of pollen ‘perga’ or ‘bee bread’.

Fresh pollen is high in moisture and protein and, especially when brought into the hive—which stays around an internal temperature of 37˚C—becomes an ideal environment for mould growth. The bees’ digestive fluids, however, are rich with lactic acid bacteria (LAB) (Vásquez and Olofsson 2009), which come to dominate the pollen substrate when it is packed together and sealed from the air with honey. The bacteria metabolise sugars in the pollen, producing lactic acid and lowering the pH from 4.8 to around 4.1 (Mattila et al. 2012)—well below the generally recognised threshold for pathogenic microbial growth of 4.6.

These LAB come predominantly from the bees themselves, rather than, for example, the plants from which they forage (Gilliam 1979a; Gilliam 1979b), and the difference in microbial ecology of fresh pollen vs. stored is great (Gilliam et al. 1989). Furthermore, many of the genera which come to dominate fermented pollen are also some of those most common in fermented food products made by humans: Oenococcus, Paralactobacillus, and particularly Bifidobacterium, a known probiotic genus whose activity in bee hives has also been correlated with lower counts of pathogenic microbes (Mattila et al. 2012). Beneficial yeasts and fungi have also been documented in bee bread (Gilliam 1979b; Gilliam et al. 1989). Many of these beneficial fungi are susceptible to fungicides in the environment (Yoder et al. 2013), often applied to plant crops. Greater microbial diversity of beneficial microbes in bee colonies has also been correlated with greater genetic diversity of the bees themselves, and this symbiosis between bees and their microbes, like in humans, is becoming increasingly studied as a likely fundamental part of overall hive health (Mattila et al. 2012).

In addition to preservation (Anderson et al. 2014), the fermentation process of the pollen also renders its nutrients more available (Mattila et al. 2012). Some proteins are broken down into amino acids, starches are metabolised into simple sugars, and vitamins become more bio-available (Degrandi-Hoffman, Eckholm, and Huang 2013; Herbert and Shimanuki 1978). In this sense, bee bread is even more health-giving than the more commonly available fresh bee pollen.

Yet the sensory transformation of the bee pollen into bee bread might be most remarkable. The floral and herbal notes of individual granules become enhanced; the powdery, sandy texture becomes firmer and moister; the acidity from the lactic acid brightens the flavour and tempers possible bitterness; and the fermentation also produces secondary aromas that generate new flavours of fruit—some, for example, gain the distinct taste of mango. The particularities of the fresh pollen, depending on the season and its plant sources, become enhanced, and new qualities that were not present before are revealed.

We have used the bee bread in different recipes: ‘Peas ‘n’ Bees’, a soup of fresh pea juice with bee larvae, some fried until crisp and some blanched with lovage, garnished with fresh lovage and bee bread; or ‘The Whole Hive’, a dessert of beeswax ice cream, sauce of honey kombucha and bee bread, crystallised honey crisp, propolis tincture and apple blossoms. The potent bacterial activity of the bee bread also makes it a fantastic inoculum for a robust start to lactic fermentation of cream into crème fraîche or for butter.

Our interaction with Apis mellifera is one of the oldest coevolutionary relationships between insects and humans—and yet there is still so much we don’t know about the bees. For example, despite the current explosion of interest among scientists to study the complex microbiota of bees, we still do not know exactly which species of microbes are driving this transformation of pollen into bee bread, or exactly how.

Though as fascinating, delicious and versatile as the bee bread is, my favourite part about it might be the realisation that we humans are not the only ones who ferment our food. In fact, we might not even have been the first to stumble upon and learn to collaborate with the vast world of beneficial microbes that transmute some of our most valued gastronomic products: Apis mellifera might have gotten there long before.

Bee bread is typically available to harvest throughout the summer months. Ask a local beekeeper for more information. If you’re lucky, they might be willing to share some of this potent, delicious treat.

The Latest
Categories
Archives
Manage Cookie Consent
We use technologies including cookies to store and access device information. Consenting to these technologies is required to use this site.
Manage options Manage services Manage vendors Read more about these purposes
View preferences
{title} {title} {title}