What are the predators of the honeybee? 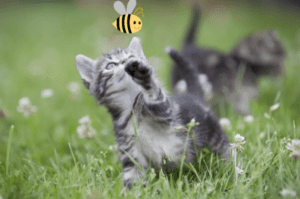 We hear about all of the issues effecting the bees but what are they?

Honeybees are far from defenseless as they are equipped with stingers. Beekeeping 101…there are 3 types of bees in the hive, a queen (1 per hive), worker’s (up to 50,000) and drones (a few hundred peak season). The queen and the workers are all female and have stingers attached to a venom sack. The worker’s have barbed stingers as to stick into the skin along with the venom sack that pumps, it is ripped from the bee as she pulls away. This means that she will sacrifice her life to defend her colony. They also emit an attack pheromone to alert other bees to a threat. This also means honeybees are less apt to sting, unlike wasps and yellow jackets, and need to feel truly threatened as they will not survive. The queen bee, similar to that of a wasp, has a smooth stinger, meaning, akin to a fencing sword, they can fight many battles and sting multiple times. Drones, the males, have no stingers and thus are defenseless, sorry boys.

So, perhaps more obvious predators, animals. The classic, bears! Bears, skunks, snakes (mainly in Africa), and to a lesser extent, raccoons, opossums and mountain lions. They are after either the honey or the insect, particularly the larvae. Bears are serious predators that do substantial damage to hives. These animals may even smash the hive in order to extract the honey and bees inside. Like skunks, once bears discover a hive, they return repeatedly unless prevented from doing so by human interventions like electric fences. Oh and don’t forget the honey hawk! In Latin apivorus “bee-eating”, from apis, “bee” and -vorus, “-eating”. Because we are dorks, let’s go down the rabbit hole for a moment. They tend to summer in the UK and winter in parts of Africa. They prefer that larvae of bees and wasps so they stalk the adult bees back to the hive, there is uses it’s talons to open the hive to gain access to the nutrient rich and milky larvae. They possess specialized feathers on their faces, which work as a sort of armor against potential stings of the bees and wasps whose nests they raid. There are many other birds with curved beaks that can smash the head of the bee and roll the venom sack to remove it and avoid the toxin.

Of also interesting note, hornets can invade the hive, as they are meat eater and the honeybees can surround and create a “murder ball” by heating their bodies rapidly to basically cook the invader alive. The internal temperature threshold is actually a few degrees lower for the invaders than the honeybees. Read more about that here:https://io9.gizmodo.com/meet-the-hot-defensive-bee-ball-one-of-the-craziest-5892986

The largest threat is presented by we humans. honeybees are not native to North America post glacial period. Most beekeeping is done for pollination of large mono crops. Bees are trekked from all over into holding yards for blooms cycles of almonds, apples, citrus and a whole host of other foods. This used to be accomplished on a local scale. Given that honeybees can fly miles in radius, the ability to spread these pests and diseases have grown greatly, This can effect stationary beekeepers as well upon the return home from these migratory travelers. The increased use of pesticides combined with shrinking forage can devastate massive amount of colonies as well as native forages. To top it off increased climate changes effect the plants and the colonies and their ability to pollinate.

One third of all food crops rely on insect pollination. Insects pollinate around 130,000 species of plants and both humans and animals rely on those plants for nutrition, beauty and oxygen.

Fret not, we here at Worker B feel that pollinators can be saved. Please don’t use pesticides, particularly neonicotinoids, pledge to find alternatives for unwanted parasites and fungi on your plants. Check out more ways to help here:

Above all else, start the conversation 🙂